The farm lands and storage are located in Rio Grande do Sul State, southern Brazil. Rio Grande do Sul lies within the south temperate zone and is predominantly humid subtropical. There are four relatively well-marked seasons and rainfall is well distributed throughout the year, but occasional droughts can occur. The winter months, June to September, are characterized by heavy rains and by a cold southwesterly wind. Rainfall in the region generally averages between 1800 and 2000 mm.

Grouped up in one single property that cares silos, warehouse, deposit, harvesters, seeds equipments, classifiers and all the other equipment needed to process it, the farm has the main objective to raise as an independent grower and utilize sustainable management at the agriculture seed and commodities production and reinvest on the company structure, environmental and social projects providing scholarship opportunities to the children of our employees. We work with high technologies and biotechnology in seed, equipments, new chemicals molecules and crop management. 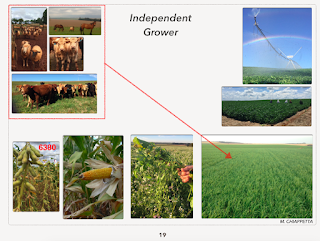 Our enterprise started as a family farm where we produce soybeans, sudan grass, millet as an independent grower and corn seeds in vertical scale, and forage crops such as black oats, radish, rye and rye-grass seeds in a nice owned area. During 50 years we obtained good field experience in how to produce and process quality seeds. We work together with private and public breeding companies, where we multiply the genetics seeds in our fields, harvesting, processing, packing and commercializing to distributors and agriculture producers.

I am involved in the following areas: seed production, farm management, soil and fertilizer analysis for good quality seeds, no-till farming systems, seed and grain price analysis and fundamentals. We are always interesting in exchange knowledge and experience with other companies to evolve, to have mutual benefits and being a contact to Chinese companies in southern Brazil.

Brazil is a massive and important producer and exporter of grain and oilseeds. Its flour milling industry, concentrated in the south, depends on imported raw material. Logistical problems remain an issue for the grain industry, adding cost to exports. Total soybean production in 2015-16 it was almost 100 million tonnes (MT) and exports around 45MT. Corn production is also around 100MT. Wheat production is around 6 MT, rice 10MT. Total grain exports at 25 MT. Imports are mostly wheat at 6.8 MT, according to Rabobank. 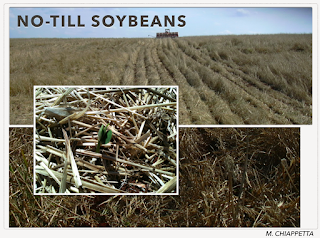 As mentioned by Ministério da Agricultura, Brazil has more than 200 million cattle and it became a very important meat exporter country. Beef and milk cattle farmers are using more technology in order to get more kilograms of meat or liters of milk per hectare. The forage seed demand come mainly from grass, but it also helps to increase organic matter in the soil and less soil erosion, that is no-till farming system. During winter crops, we can choose if we grow cereals such as wheat or oats to harvest, and in some area raise cattle in an integrated livestock-crop system.

In Rio Grande do Sul State, most cases we can harvest two crops per year. Soybeans in the month of April and plant cereals or forages between May and July to harvest in November. But there is two possibilities of management to grow 3 crops per year: 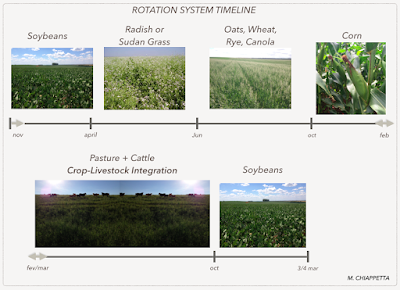 a) After soybeans, we can grow two crops, the forages are used to cover the soil. There is a possibility to use aerial planting, 30 days before harvest, in March, an ag aircraft spread seeds over the soybean field, sudan grass or radish, reducing the period of time for the forage to develop. If the next summer crop will be soybean again, it will be planting in the end of October until the end of November, depending the cultivar cycle, so there is a possibility to harvest the cover crop in June and plant a different cover crop and harvest on October, before planting soybeans again. That is the most efficient seed production management but it all depends on the soybeans and forage cycles.

b) Planting corn between august and September, harvest in February, and plant sudan grass as a cover crop, not thinking in harvest the seeds, only to protect the soil during rainy seasons and recycle soil nutrients. Desiccate with herbicide the sudan grass and plant radish, oats or wheat. The risk of planting corn too early in August is the risk of frost, because Rio Grande do Sul State is in Southern Brasil, and in winter between June and September is very common to have frost. Frequent farm managements are soil and fertilizer analysis, no-till farming system, grain and seed price analysis and fundamentals.

Soybeans are our main crop. In Brasil there are a great deal of soybean cultivars. Most of the cultivars do not last more than 5 years, because the industry always release new genetics almost every season, but most of the southern farmers are resistant to change in the way of farming, mostly because the apprehension of the cost of production and claiming that the way they do has always being productive, but there are some new opportunities to the seed industry.

To produce seeds in Brasil, all companies has to request a register in the Ministry of Agriculture, and every field with seed production are controlled. The producers send all the documents by online systems and will be reviewed and approved or not by the supervisor from the Brasil's Ministry of Agriculture.

Most of the Breeding Companies in Brasil protect their cultivars. It means that Sementes Chiapeta, as an independent seed grower, needs an authorization to multiply their seeds. But there are some cases, that public cultivars can be growth by any seed grower without the breeding company authorization.
Farmers in Brasil are not allowed to sell seeds to other farmers if they are not register as seed producers, but they can save and reserve the seeds to produce next year, and that is one of the challengings for the seed industry.  Some breeder companies, are charging farmers for saving theirs seeds claiming the usage of a new trait technology. So, if a farmer wants to save seeds, he needs to fill up a special document and register that document at Ministry of Agriculture. 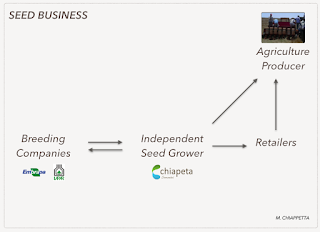 A good breeder program is what we look when choosing a cultivar or a Breeding Company to start working with as a partner. The technology used resulted in an important growth in volume rather than just in area, even with irrigation. The combination of better cultivars, agricultural input and crop management practices increased the yield in several crops that we work. Around 15% of our customers, are agriculture producers, in general purchased their seed needs from the company. The rest of the seeds we produce are commercialized with the Breeding Company, in vertical scale, and retails. When we sell seed direct to agriculture producers, we also do an extension program to follow the farmer during his planting season and plants development. Distribution and retail chains has growth in the past years in Brasil and the available information on consumer preference, specially retailers, so we started to focus in a coordination of agribusiness system that enables the management of seed quality.

We also have empirical researches in local areas about southern brazilian agriculture. We notice that some has been frequently subdivided according to socioeconomic and technological characteristics. Subsistence agriculture and small agriculture, that normally uses native seeds and exchange between them according to FAO, and normally do not use higher seed technology. But there are the farmers between subsistence and small. There is a big market share of commercial and corporate agriculture, that cares about seed business and a way to increase yields, helping farmers to have a better life quality and grow with new seed technologies and information about production.

Posted by Marcelo Mucari Chiappetta at 8:27:00 AM No comments: 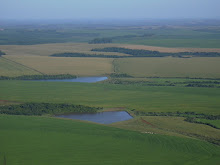